ODD THINGS TO EXPECT, WHEN YOU ARE EXPECTING…

Crystal is currently going through her first pregnancy, which early on has been a huge eye-opener for her. She is now ready to share some gritty truth and secrets about the whole pregnancy thang. Odd things to expect when expecting….

Like me Crystal, who is a hard-working scientist, never really saw herself as the mum type. But after a bit of convincing from her partner, who had always wanted a small family, she finally came around to the idea of having some ankle-biters. And with the biological clock ticking and many of their friends having kids, they decided to give it a go too. She is now 34 weeks pregnant and has a beautiful healthy big belly. So far she has had a great pregnancy with only a little morning sickness. BUT, nevertheless, she has been stunned by some of the physiological changes that happen to the body – changes that people don’t tend to talk about…

During the first trimester Crystal was very surprised about her uber sensitive sense of smell – suddenly she found many different smells could trigger nausea as soon as they hit her nostrils. One of the worst and most intense smells she experienced was coming from her little cute dog – every time it passed wind, it sent Crystal straight for the toilet bowl. Additionally, sadly for her partner, Crystal had to stop him from drinking any of his beloved whiskey, as the sweet smell would make her gag reflexes go bonkers too. And if he couldn’t withhold the temptation of whiskey, he was kicked out into the kennel, where he could hang with the smelly dog. Side note: Apparently, this kind of heightened sense of smell is common during the first trimester (> 40% of pregnant women have reportedly increased sensitivity to various smells) and it can often be accompanied by morning sickness. Thankfully, this sensitivity will normally slowly disappear later on in pregnancy.

Being a scientist, Crystal couldn’t resist reading EVERYTHING about the various physiological changes that can occur while being pregnant. It’s no secret that the body contorts in all different kinds of ways to accommodate the baby. What really freaked her out was the fact that her internal organs will be put under significant amount of pressure and have to shift position during the growth of the little one. As the pregnancy progresses, the uterus will get bigger and slowly rise up and out of the pelvic cavity, displacing the stomach, intestines and other organs to the back and sides of the abdomen! At the same time the growing uterus can stretch the muscles in the abdomen, which can cause the two large parallel bands of muscles that meet in the middle of the abdomen to separate – a condition called diastasis recti, affecting the majority of pregnant women, including Crystal. Nevertheless, she is pretty good at putting a positive spin on everything. As an example she is now very stoked about her newly-invented party trick that she is able to do with her belly and slightly separated abdominal muscles. The trick is called “the volcano crater”, which can be achieved by tightening up the stomach muscles while laying down – and “tada” a bulging and alien-like volcano crater is created (if you have been pregnant, you probably know what we are talking about). I must confess I also enjoyed showing off this trick, while being pregnant with my twins, as I had the biggest belly ever. However, even though it looks cool, it’s not recommended, as it apparently can separate the muscles even more. SO PLEASE DON’T DO IT AT HOME and remember to use the log roll manoeuvre (roll onto your side and push yourself up with your arms) every time you get out of bed instead of using the abdominal muscles.

All these internal changes all sound pretty amazing and crazy at the same time! Have a look at this cool animation of how the organs shift during pregnancy.

Besides the horrifying facts about the compressed organs, Crystal also worried about the external changes of the body – such as the stretching of the skin, often accompanied by very itchy skin. She is especially concerned about stretch marks, as she has a petite frame and not much skin to spare. In order to prepare and soothe the stretching skin on her growing belly, Crystal began to use the My Lilli Pilli SOOTHING Belly Oil, when she was around 20 weeks into her pregnancy. As soon as she used the oil, she felt an instant relief – the dry itchy skin disappeared. Prior to becoming pregnant, Crystal rarely used any skincare, so when she suddenly started her Belly Oil routine, she actually enjoyed doing a nice thing for herself and felt very special – a bit of a luxurious treatment. And as an extra bonus, her partner loved the subtle aroma of the Belly Oil that she had massaged into her skin before bed time.

Later into her pregnancy (around 30 weeks) Crystal started using the thick nourishing CALMING Belly Milk on her growing belly and breasts every morning after shower. When asked how she feels after applying the cream, she said “my skin is feeling silky, nicely hydrated and shiny – the belly is so soft and supple. And sometimes my partner thinks that my belly is too perfect for being this far in my pregnancy”.

And she still doesn’t have a single stretchmark! 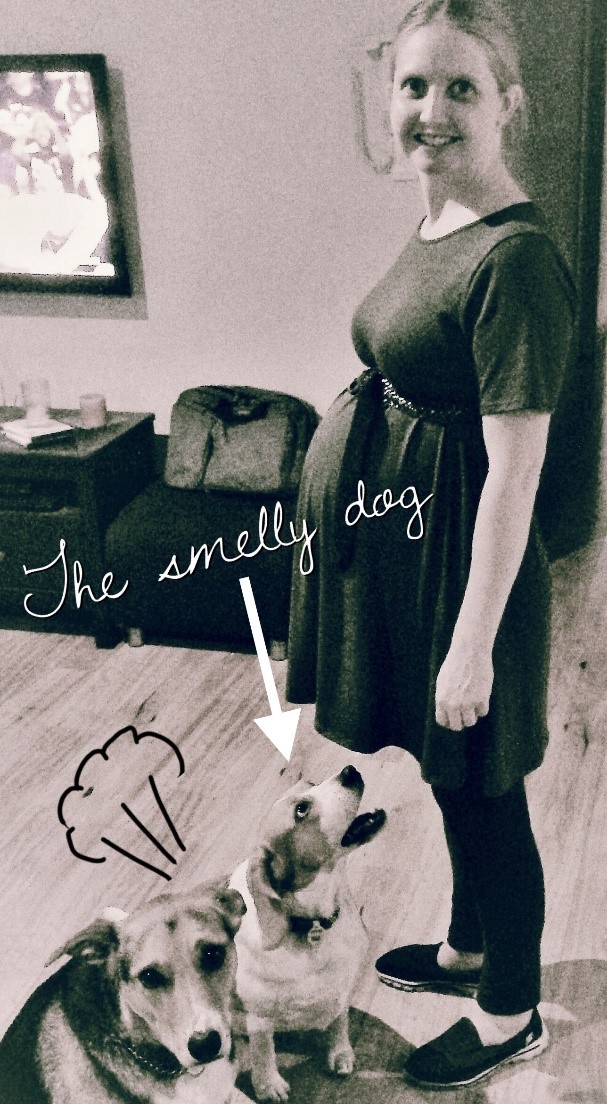 Picture: Crystal and her cute, but smelly dogs.

Keep calm until next time!

About the Author: Charlie

Charlie, who's a geeky biochemist by heart, is the founder of My Lilli Pilli. She specialises in safe and effective organic skincare for people with sensitive skin, in particular pregnant and nursing mums. As a Mum of three, including being blessed with twins, Charlie also fully understands the various needs of expecting and new Mums as they navigate their individual pregnancy journeys.

Maja Biehl
06:20 22 Feb 22
I had dry, itchy and inflamed skin on my eyelids and my neck. After 3 days of using the “Gel Cleanser” my skin was back... to normal (soft and hydrated). It’s really an amazing product plus the aroma is lovely.I would definitely recommend to a friend!read more

Rita Nicolaou
23:54 17 Nov 21
The products are beautiful! I have combination skin and the products have balanced my skin, plus they smell beautiful.

Marlize Bekker
20:03 21 Oct 21
I absolutely love this skin care range! I have super dry skin from swimming in chlorinated pool water and playing sport... outdoors and I found the Blue Range to be perfect for my skin. I’ve used the gel cleanser, the moisturiser, and the serum and they made my skin feel so soft! I love the serum so much I wish I could bathe in it!read more

Beardy McJohnFace
21:49 17 Dec 20
The gel cleanser is incredible. I've used moisturizers post-shaving in the past but nothing compares to how amazing my... skin feels after using the cleansing gel.read more

Malou Hansen
22:04 16 Dec 20
In love with these products! Reliable company and great at communicating with costumers - every time! I would... definitely recommend others to buy these products... AMAZING!read more

Nathalie Hartman
11:32 10 Aug 20
Love this products, they helped me have a perfect belly during my pregnancy and now my sister in law loves them too. I... ordered a mum to be bundle for her and they even arranged international postage to France for me. "So beautifully paked and so exclusive". Perfect gift!read more

Simon Dillon
02:21 08 Jul 20
Great products for all skin types. my girlfriend loves the moisturizer I gave her and she wears it day and night. great... price tooread more
Next Reviews