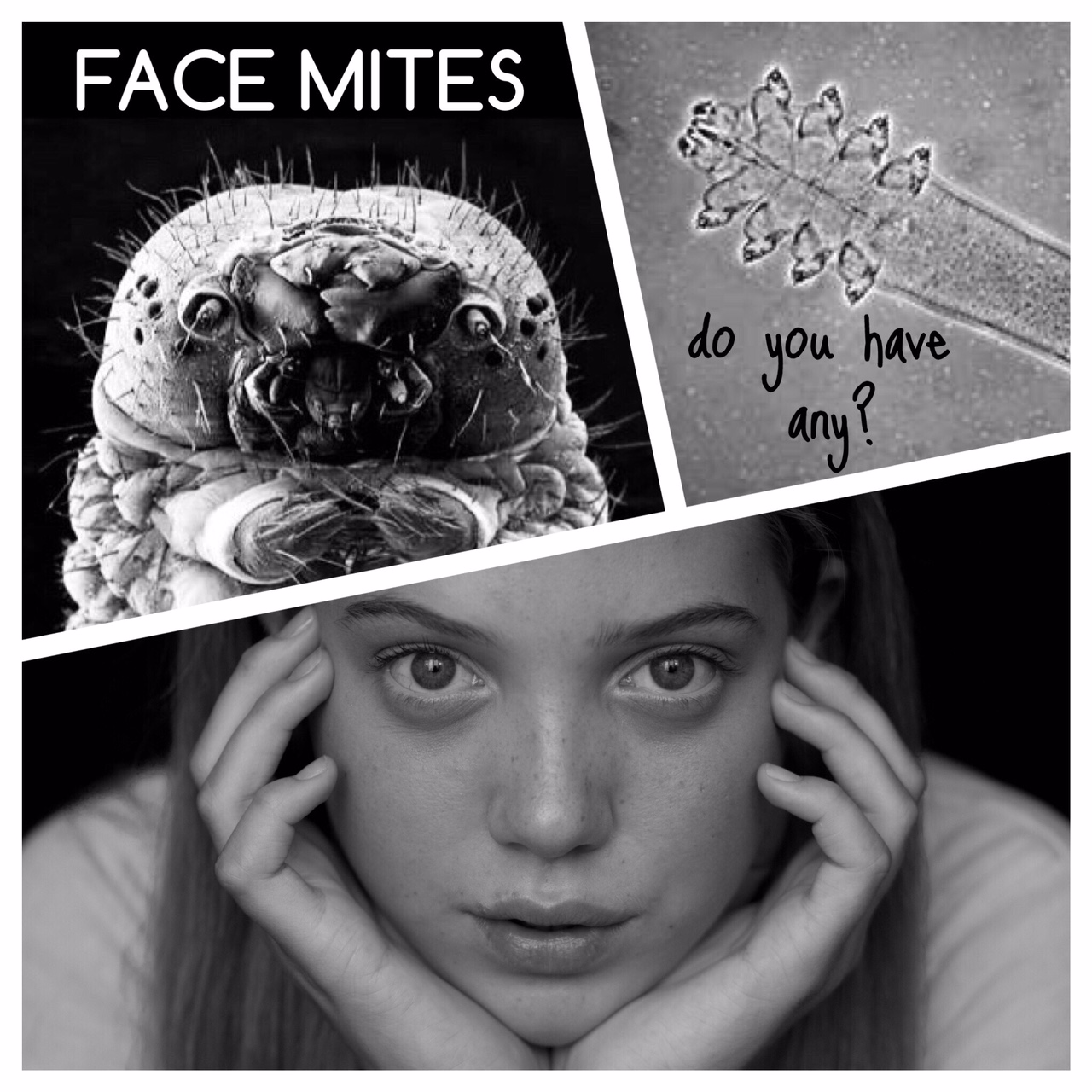 You might not be able to see them on your face, but it is very likely that they are there….. Face mites are microscopic eight-legged creatures similar to spiders that spend their entire lives on our faces, where they eat, mate and finally die. Interestingly, the male mites are much smaller than the females, and they even have a penis on the back!

Two species of Demodex mites have been identified on the human facial skin; Demodex folliculorum (0.44mm long) and Demodex brevis (0.24mm long). Their bodies are elongated, almost worm-like, and they have eight short and stubby legs near their heads. One of the species is mainly found in the hair follicles and the other one in the oily sebaceous glands. It appears that they come out at night to mate and then go back into their pores, where the females lay their eggs – their lifespan is estimated to be around 14 days. As mites do not have an anus they store their waste material in a crystalline form in their body. So when they die they kind of “explode” releasing all their lovely internal content containing bacteria and other ingredients which can cause your face to become irritated and inflamed.

OK, let’s have a little break and calm down! Please, please do not go and exfoliate your face with a cheese grater, even though your skin might be itching after reading this information.

It’s all good – you will survive. All races of the human adult population have these little bugs, but they are rarely found on newborn and younger children. The mites are a part of the normal fauna on our skin and can live there without causing any skin problems – but if our immune system is suppressed, the mites appear to increase in numbers and this can potentially cause issues such as rosacea, perioral dermatitis, seborrheic dermatitis and blepharitis etc (see table 1).

Table 1: Increased mite population have been identified in many human dermatological disorders:

Research has shown that the percentage of mite infested humans and the infestation rates are higher in older people compared to younger ones (see table 2). Interestingly, Turkish researchers have proven that daily facial cleaning and the use of a common towel can significantly change the numbers of mites. Also, the moisture level of the face seems to affect the numbers – the higher moisture level, the lower number of mites.

Conclusion: The majority of all adults have Demodox mites living on their skin without causing any issues. Scientists believe that the mites may have an unidentified beneficial role for the human host. However, when the mite population increases beyond a certain critical point due to suppressed immune system of the host, the mites might become opportunistic microorganism causing various dermatological disorders such as Rosacea. Hence, if you suffer from any of those disorders, it might be worth increasing the number of daily cleaning using a mild cleanser and only use your own towel – and try to keep up the moisture level of your skin up by using a moisturiser.

Please stay tuned as we are currently developing wonderful and suitable cleansers and moisturisers that can help keeping these “creepy crawlies” at bay.

2 Replies to “The Secrets of Face Mites”

•••GOT SHINY FACE DURING PREGNANCY?•••

•••IF I COULD FILL UP A BATHTUB WITH A SKINC

•••WHEN I BECAME FRIENDS WITH THE TOILET BOW

•••PREGNANT & WORRIED ABOUT THE SAFETY OF YO