LET’S GET SKIN DEEP…OR EVEN DEEPER. Everyone has skin – but what exactly is it?

Everyone knows that skin is our largest organ, but what does it really consist of and how does it function….? Let’s shed our skin and get started….

In an average adult, skin covers a surface area around 2m2.With the exception of the skeletal muscles, skin is the heaviest organ of the body. Our skin is composed of three layers – the epidermis, the dermis, and the hypodermis (also called subcutis). Let’s have a closer look at these layers…

This upper layer does not contain any blood vessels, so it depends on the dermis layer for its supply of nutrition. The epidermis is nourished by a process called diffusion, where molecules move from a region of high concentration to a lower concentration. A good example of diffusion is food colouring. If you place a drop of red food colouring in a glass of water, eventually the entire glass of water will have a red tint. The food colouring moved through the water until it was equally distributed throughout the glass. In the case of our skin, the living cells of the epidermis receive what it needs from the underlying dermal capillaries. Skin can also move nutrients from the outer layer inwards, which is how skincare products work to moisturise our skin.

The epidermis is divided into 5 sub-layers, that have different functions:

– the innermost layer of the epidermis situated just above the dermis. Unlike other layers of epidermis that are a multilayered block of cells, this layer only consists of a single layer of cells. This layer does an important job of generating new cells by mitosis (cell division). These new cells will eventually reach the top and replace the hardened, dead cells of stratum corneum.

– the second layer of the epidermis, which consists of 5 to 15 layers of polygonal cells. These cells are a part of the immune system and scavenge on viruses and bacteria to keep the skin safe from infections.

– the third layer that consists of flattened granular cells (3-5 layers). When the cells migrate from the previous stratum spinosum to this layer, they lose their nuclei and become flat.

– a layer that is usually detected in portions of the skin that have a thick epidermis such as the palms of the hands and soles of the feet. These areas of the skin are prone to friction and abrasion, hence they contain stratum lucidum – it works as an additional layer of protection. When examined under a microscope, it appears transparent, but is made up of dead skin cells.

– the outermost layer that insulates the skin from the outside environment. This layer is also called the “horny layer” (giggle) and consists of 15-20 layers of cells. When the cells reach this layer, they are considered dead as they do not contain any organelles and are completely flattened. They are now filled with keratin, lipids and ceramides. Keratin is a protein that keeps our skin hydrated by preventing water loss or water absorption from the atmosphere. It is responsible for the “spring back” or elasticity of our skin. Basically, this layer seals the skin keeping its contents intact. The thickness of stratum corneum varies on your body. It is thinner, and therefore more permeable on your face, and less permeable on your torso, arms, legs, hands and feet. 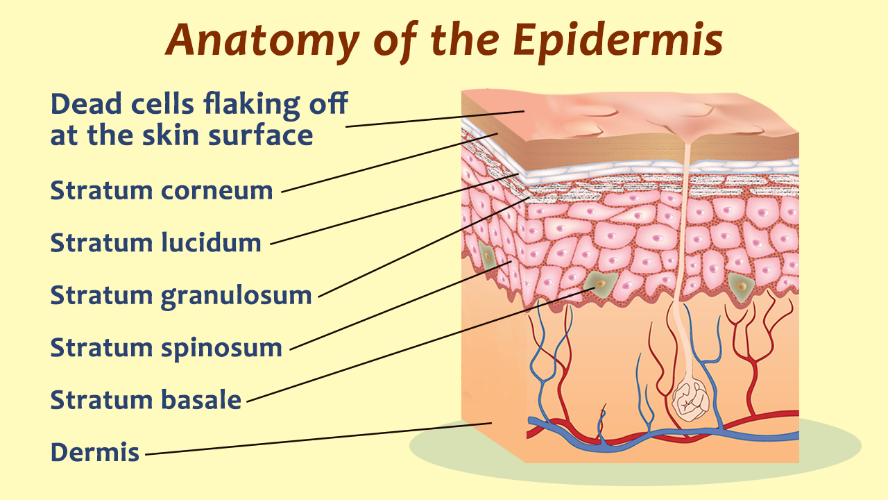 The anatomy of our outer skin layers. The picture is from bodytomy.com.

The water levels of the epidermis are high – about 70% – but these levels drop sharply between the layers of stratum granulosum and stratum corneum to about 15-30%. It is believed this is where the barrier of water loss is located. Prevention of water loss is an essential part of why we use moisturisers and creams.

The dermis functions as a supporting frame to the epidermis, supplying it with nutrients and removing waste matter via the blood capillaries. It also supports the sensory nervous system, secretory glands and hair follicles. Unlike the epidermis, which is a cellular structure, the underlying dermis consists of connective tissue. This connective tissue is made of a dense network of protein ﬁbres such as collagen (that give the skin its tensile strength) and elastin (that allows the skin to deform and return to its original state once the pressure of tension is removed).

Ageing results in progressive deterioration of the dermis, which will cause dry and wrinkled skin over time! And again this is another reason why we use skincare, as skincare can contain bio-actives that can stimulate collage and elastin production.

The hypodermis (or subcutaneous layer) is located below the dermis. It’s a layer of fatty adipose tissue. The cells in this layer synthesise and store fat in order to serve as an energy reserve. This helps to insulate the body from low external temperatures and act as a buffer against mechanical damage. On a more familiar note, the hypodermis provides the body with its contours.

The importance of keeping the skin hydrated

Since we now have a fairly good idea about how the skin is working, let’s think about why it’s important to keep the skin hydrated. When the air is warm, the skin begins to dry out. In addition, prolonged exposure to certain environmental elements and irritants, such as harsh cleansing products, will upset the skin’s natural balance of water by removing its lipids. Such drying out of the skin is known as trans-epidermal water loss or TEWL. More specifically, it is the loss of water from inside the body to its surroundings through the process of diffusion or evaporation. Dry, dehydrated skin loses its ability to stretch and consequently cracks and peels, which further accelerates the process of dehydration of the skin.

Most moisturisers work exclusively on the cells in the epidermis layer. The idea is to prevent the moisture from leaving the skin’ surface and replenish its water supply. Moisturisers essentially provide a little bit of water that penetrates the cell membranes to rehydrate and plump up the outermost layers of dead skin cells.

I hope that all made sense – otherwise let me know, and I will try to explain in another way.

Until next time, stay calm and hydrated!

About the Author: Charlie

Charlie, who's a geeky biochemist by heart, is the founder of My Lilli Pilli. She specialises in safe and effective organic skincare for people with sensitive skin, in particular pregnant and nursing mums. As a Mum of three, including being blessed with twins, Charlie also fully understands the various needs of expecting and new Mums as they navigate their individual pregnancy journeys.

Maja Biehl
06:20 22 Feb 22
I had dry, itchy and inflamed skin on my eyelids and my neck. After 3 days of using the “Gel Cleanser” my skin was back... to normal (soft and hydrated). It’s really an amazing product plus the aroma is lovely.I would definitely recommend to a friend!read more

Rita Nicolaou
23:54 17 Nov 21
The products are beautiful! I have combination skin and the products have balanced my skin, plus they smell beautiful.

Marlize Bekker
20:03 21 Oct 21
I absolutely love this skin care range! I have super dry skin from swimming in chlorinated pool water and playing sport... outdoors and I found the Blue Range to be perfect for my skin. I’ve used the gel cleanser, the moisturiser, and the serum and they made my skin feel so soft! I love the serum so much I wish I could bathe in it!read more

Beardy McJohnFace
21:49 17 Dec 20
The gel cleanser is incredible. I've used moisturizers post-shaving in the past but nothing compares to how amazing my... skin feels after using the cleansing gel.read more

Malou Hansen
22:04 16 Dec 20
In love with these products! Reliable company and great at communicating with costumers - every time! I would... definitely recommend others to buy these products... AMAZING!read more

Nathalie Hartman
11:32 10 Aug 20
Love this products, they helped me have a perfect belly during my pregnancy and now my sister in law loves them too. I... ordered a mum to be bundle for her and they even arranged international postage to France for me. "So beautifully paked and so exclusive". Perfect gift!read more

Simon Dillon
02:21 08 Jul 20
Great products for all skin types. my girlfriend loves the moisturizer I gave her and she wears it day and night. great... price tooread more
Next Reviews